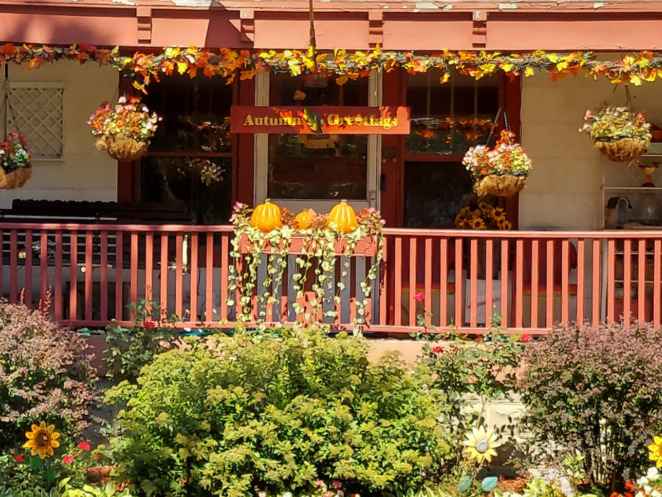 Welcome to. . .A Happy Autumn & Fall ! ! ! ! Just starting later today, so I am sharing the following facts and trivia.

Facts:
Timing: Happening today–Thursday, September 22, at 8:04 p.m. CST.
Official scientific name: Autumnal equinox – Autumn has the dual meaning of “to fall from a height” & “The connotations of the passing of the year” + Equinox means “Equal night”.
Equal timing: Day and night are all 12 hours, no matter where you are on earth, north to south.
Sun’s position: The sun rises and sets at exactly due east and west, no matter where you are on earth, north to south. The Sun is overhead at 0° neither north or south latitude, heading into the southern degrees latitude until it reaches the Winter Solstice in December.
Equator: The sun is directly overhead (the zenith) at the equator at high noon.
Day for the north pole and night for the south pole: Fall means the sun sets on the North Pole, and rises for the Antarctica, and stays lit at the South Pole for six full months. It also stays darker in the Arctic, and completely dark directly at the North Pole for six months.
Shadow and shine: The earths tilt casts the shadow on the earth evenly, meaning half of the northern and southern hemispheres both have exactly the same sunshine and nighttime. The shadow span looking in from outer space shows the shadow on both the north and south poles evenly. The sun casts a shadow that reflects your present latitude at the location you are on Earth, hence the coalition of the poles being 90° north and south plus the horizon being 90° altitude explains why the North Pole is setting and the South Pole is rising.
Not so trivial and need for sunglasses: The “blinded by the light” effect due to the fact that sunlight is aligned with most east-west routes, just like it does in the spring with the vernal equinox–leads this past week and next week being the time just like its spring sister, to be the most dangerous to drive near or around sunset (or sunrise).
Astronomical not meteorological: The fall season start is astronomical. Meteorological start of autumn began on September 1st., although to some it usually is thought to start the day after Labor Day, making the fall season seem the shortest of all seasons. Winter returning early will double down on the seemingly short season of autumn.
The moon: It has been said that the moon is rather “spooky”, especially in the fall season’s Harvest Moon, October’s Hunter’s Moon, and November’s Beaver Moon. The full moon is always a reflection of the night. It rises exactly when the sun sets and sets when the sun rises. It follows the shadow of the sun exactly. The full moon is up in the sky approximately where the sun was 6 months ago. Both the full moon that happened recently is the closest to autumn’s beginning and the next one are also very close to 12 hours in length. The full moon before fall is where the full moon that is still to the south of the equator. It is the last full moon that is over 12 hours. The next one is the first full moon that happens to the north of the equator. The full moons on the winter side are all over 12 hours.